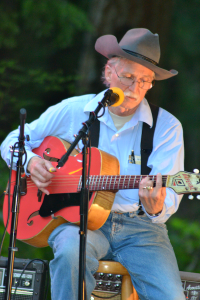 “Whether comedic, politically pointed or deeply human – J.W,’s songs go straight to the listener’s funny bone, heart and soul. With his easy going manner, effortless old time guitar playing and low key but hilarious stage presence he doesn’t exactly let on where he is taking you until the song is over and you realize he has perfectly captured human frailty via a song about a lonesome cowboy sitting at his campfire, scared and hearing things – possibly space aliens.”
Karin Blaine—Victory Music Review

“…one of the absolute premier songwriters and singers in the story country mold ever out of the Northwest.”
Chris Lunn—Ancient Victorys

“Here is a storyteller, funny guy, and talented songwriter who has put together a terrific collection of songs, and the whole project is worthy of a careful listen. My favorite song right now….is the title song, ‘Cowboys on the Skyline’, because, God help me, I like the yodeling. There’s something in that chord progression, both wistful and sure, that makes me picture a cowboy at sunset, as the dogies settle down to sleep….”
Lynette Hensley— Victory Music Review

McClure’s recently released CD Cowboys On The Skyline has received airplay on numerous folk and country radio shows. His song ‘Need a Lazy Woman’ was a finalist in this year’s (2011) U.S.A. Songwriting Competition, and his song “Blue” was a finalist in the International Acoustic Music Awards (IAMA).